Andrew Baranoski joined PIRC in January 2020 as Executive Director. He has long been committed to refugee and asylee resettlement and access to legal services for all immigrants. Prior to joining PIRC, Andrew proudly served as the Executive Director of the American Civic Association in Binghamton, New York from 2008 until 2015.  Most recently, he worked in higher education at Coastal Carolina University in Conway, South Carolina.  He graduated from Binghamton University with a BA in anthropology. After college, he became certified as a paralegal at Syracuse University.   Later he earned his Master of Public Administration degree at Binghamton University and completed a year-long graduate internship at the Legal Aid Society of Mid-New York.

Andrew was born and raised in Snyder County, PA.  Andrew and his wife Barbara are excited to return to Pennsylvania to be close to family and friends.  They enjoy traveling and all genres of music and often combine these two past-times attending music festivals abroad and across the USA.

Samantha Naranjo-Gonzalez was born and raised in Cuba. She moved to the U.S with only her mom in 2016. She is currently working on her Associate in Paralegal Studies and plans to continue her education in the legal field after she graduates. She is fluent in Spanish and is currently working on obtaining her Interpreter license. As an immigrant herself, Samantha is very passionate about immigration law and helping other immigrants like her achieve their dreams.

Ryan Brunsink  is a managing attorney for the Detained Program. He joined PIRC in March of 2015, after serving as a judicial fellow in the Court of Common Pleas in Philadelphia where he regularly drafted legal opinions. Ryan graduated, cum laude, from Pepperdine University School of Law in May of 2014. At Pepperdine, Ryan successfully represented vulnerable clients with fear-based claims through Pepperdine’s Asylum and Refugee Clinic. He worked as a summer law clerk at the Law Offices of Carl Shusterman, a prominent immigration firm in Los Angeles, and provided pro bono legal aid to indigent clients through Christian Legal Aid of Los Angeles during his time in law school. Ryan obtained a BA in Economics and Religious Studies at the University of Virginia in 2008, and remains an avid Wahoo fan. Ryan is proficient in Spanish.

Ben Hooper joined the Detained Programs at PIRC in January 2018.  As a legal aid attorney and manager since 1999, Ben’s advocacy work has included federally subsidized housing, mortgage foreclosure, domestic violence and immigration.  Immediately prior to joining PIRC, Ben worked at the Pennsylvania Coalition Against Domestic Violence where he coordinated the Civil Legal Representation Initiative, providing legal service to victims of domestic violence in twenty-two counties across Pennsylvania.  Ben earned his J.D. degree from Northeastern University, and a B.A. in Political Science at Binghamton University.

Melissa Vega joined the Detained Programs at PIRC in April 2019. After graduating with honors from Widener University Commonwealth Law School, Melissa clerked for The Honorable Mary Hannah Leavitt of the Commonwealth Court of Pennsylvania for three years. Upon completing her clerkship, Melissa set up her practice as a sole practitioner, representing clients in family-based petitions, naturalization, TPS/DACA, non-immigrant visa applications and removal defense. Immediately prior to joining PIRC, she practiced immigration & naturalization law in the Houston, Texas, area. Melissa is fluent in Spanish.

Alissa C. Cardenas Harrison joined the Detention Program at PIRC in January 2020. Prior to working at PIRC, Alissa worked for the Pennsylvania Department of State and has spent the majority of her legal career thus far as an Assistant District Attorney assigned to the Special Crimes Unit where she helped children and victims of sexual assault through the criminal justice system.  She interned with the Executive Office of Immigration Review in 2013 and has worked with two local immigration attorneys in assisting individuals with fear-based claims.  Alissa earned a Juris Doctor from the Thomas R. Kline School of Law at Drexel University in 2014 and a B.S. in Human Development and Family Studies from the Pennsylvania State University in 2011. Alissa is currently licensed in Pennsylvania and the U.S. District Court for the Middle District of Pennsylvania.

Fernanda Hernandez joined PIRC in August 2016 as the Office Assistant.  Before starting with PIRC, Fernanda worked for four years at ACNB Bank as Customer Service Specialist.  She graduated HACC with a degree in Behavioral and Social Sciences, with a concentration on Paralegal Studies in 2016, and earned her Bachelor degree in Applied Science in Technical Leadership from Bloomsburg University of Pennsylvania in 2019.  Fernanda is fluent in Spanish, and received her DOJ accreditation in early 2018.

Karina Suarez joined PIRC in January 2020 as the Program Coordinator for our Detention Programs. She is a recent graduate from Indiana University where she earned her Bachelor of Science in Public Affairs and received her Master of Science in Public Affairs specializing in international development and sustainability. Most recently, Karina worked for the City of Bloomington, Indiana to facilitate accessibility advocacy efforts. As the proud daughter of two Mexican immigrants, she is passionate about immigrant rights. Karina is fluent in Spanish.

Ashley L. Springsteen, joined PIRC in February 2019 as a staff attorney for the Immigrant Survivors Project. Prior to PIRC, Ashley served as an AmeriCorps Equal Justice Works Immigration Legal Fellow at the Legal Aid Bureau of Buffalo, where she launched a successful immigration program focused on providing holistic legal services to low-income immigrant and refugee populations in Western New York. Ashley earned her J.D. from the University of Pittsburgh School of Law with graduate certificate in International and Comparative Law  and her B.A. in Sociology from Indiana University, Bloomington. Ashley is currently licensed in Pennsylvania and the U.S. District Court for the Western District of Pennsylvania.

Yudelkys Rodriguez De Vargas joined PIRC in September 2019 as a Legal Advocate/Staff Attorney.  Yudelkys obtained her Bachelor of Arts degree in Philosophy from John Jay College of Criminal Justice, CUNY, where she graduated Cum Laude and with Honors in Major. She then earned her Juris Doctor degree in May of 2019 from The Pennsylvania State University, The Dickinson School of Law, where she was the president of the Latinx Law Students Association, worked as a student attorney in the Community Law Clinic representing low-income community members in matters of family law and social security disability, and received the 2019 Outstanding Law Student Award from the National Association of Women Lawyers. Yudelkys is licensed in Pennsylvania. Yudelkys is a native Spanish speaker.

Sarah Martin-Torres is the State Liaison for the Immigrant Survivors Project at the Pennsylvania Immigration Resource Center. She holds a master’s degree in social work from Temple University and has been providing immigration legal services to survivors of domestic violence, sexual assault and human trafficking for nearly a decade as a Department of Justice Accredited Representative. Ms. Martin-Torres also coordinates the Immigrant Survivors Advocate Network (ISAN) and is fluent in Spanish.

Nadia Leon joined PIRC in September 2019 as the Program Assistant for the Immigrant Survivors Project.  Nadia was the Low Intensity Support Services Community Coordinator for Penn-Mar Human Services for over 5 years.  She graduated from Hostos Community College with a degree in applied science minoring in education in 2011.  Nadia is fluent in Spanish and is passionate about helping others in the community face the obstacles and challenges they may encounter as immigrants.

Rosa Perez-Lupian graduated from Delone Catholic High School in 1992 and attended DeVry University.  She is the daughter of Mexican immigrant parents.   In 2005, she began her 12 year career as Bilingual Client Advocate and Community Education Coordinator at YWCA Hanover Safe Home, where she established a robust program of community outreach, speaking to thousands of students as well as adult groups about healthy relationships and intimate partner violence.  While developing her skills as an advocate, Mr. Perez-Lupian found that assisting immigrant victims of crime brought deep satisfaction.  Through this work, she formed a strong bond with the Pennsylvania Immigration Resource Center, where she began to work in November 2017.

Jazmin H. Hernandez joined PIRC in August 2019 as a Citizenship Coordinator. Jazmin is the daughter of Mexican parents who brought her to the U.S. in 2008 when she was 11 years old. She earned her Associate in Applied Science in Paralegal Studies in June 2017. Jazmin continued her education at Central Penn College and graduated in March 2019 with a Bachelor of Science in Legal Studies. She worked as a paralegal for a private law firm assisting in family petitions, asylum, and removal proceedings. She is passionate about helping the immigrant community as she is an immigrant herself and knows the obstacles and challenges they face. Jazmin is fluent in Spanish.

Board of Directors
Our Programs
Back to top 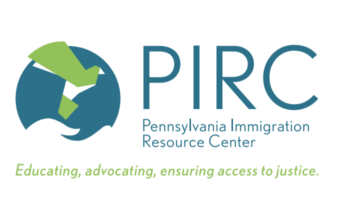